Changes in climate extreme events according to RESCCUE

RESCCUE project was devised to analyse future urban impacts due to climate change so as to improve the resilience of three target cities: Barcelona, Bristol and Lisbon. In order to achieve that, future climate projections up to the year 2100 and changes in different weather extreme events were obtained at a local scale. These projections were obtained working with ten different climate models (CMIP5) and considering two of the main Representative Concentration Pathways (RCP4.5 and RCP8.5) as were established in the last IPCC report (IPCC5). These models were downscaled through a sophisticated statistical method (developed by FIC) to obtain future climate projections at local scale considering therefore all type of local particularities. This task was performed for all identified climate drivers: temperature, precipitation, wind, relative humidity, sea level pressure, potential evapotranspiration, snowfall, wave height and sea level

As it was previously found for mean values, the most important future changes in extreme values will be given by temperature in the three cities. Extreme temperature is expected to rise in these locations between +2.5°C and +7.5°C, and heat wave days up to +1000% (that is, ten times the actual amount of days). Regarding precipitation, heavy daily and sub-daily rainfall will increase up to +30% for most common events in Barcelona and Bristol (those that occur approximately once every two years) since a warmer atmosphere can host more moisture. On the other hand, extreme snowfall (once every 100 years) could increase up to +25% in Barcelona due to greater humidity, but would strongly decrease in most common events due to greater temperature; this last result is also applicable to Bristol. Droughts would increment due to greater evapotranspiration in the three cities. Finally, windstorms appear to increase only in Barcelona about 10% while storm surge would rise in Bristol by the year 2100.

These results will drive us to a more extreme climate, especially in terms of more frequent hot weather but also with a faster hydrological cycle: the driest days will present more evaporation and wettest days would be provided with more water to be precipitated as rain.

The image below shows the climate change results for Barcelona, Bristol and Lisbon in the period 2015 to 2100, where the centre represents a zero change and the edges represent an increase of 100% with respect to the derived variables to be predicted. The line represents the middle scenario, while the shaded area represents the area of uncertainty. 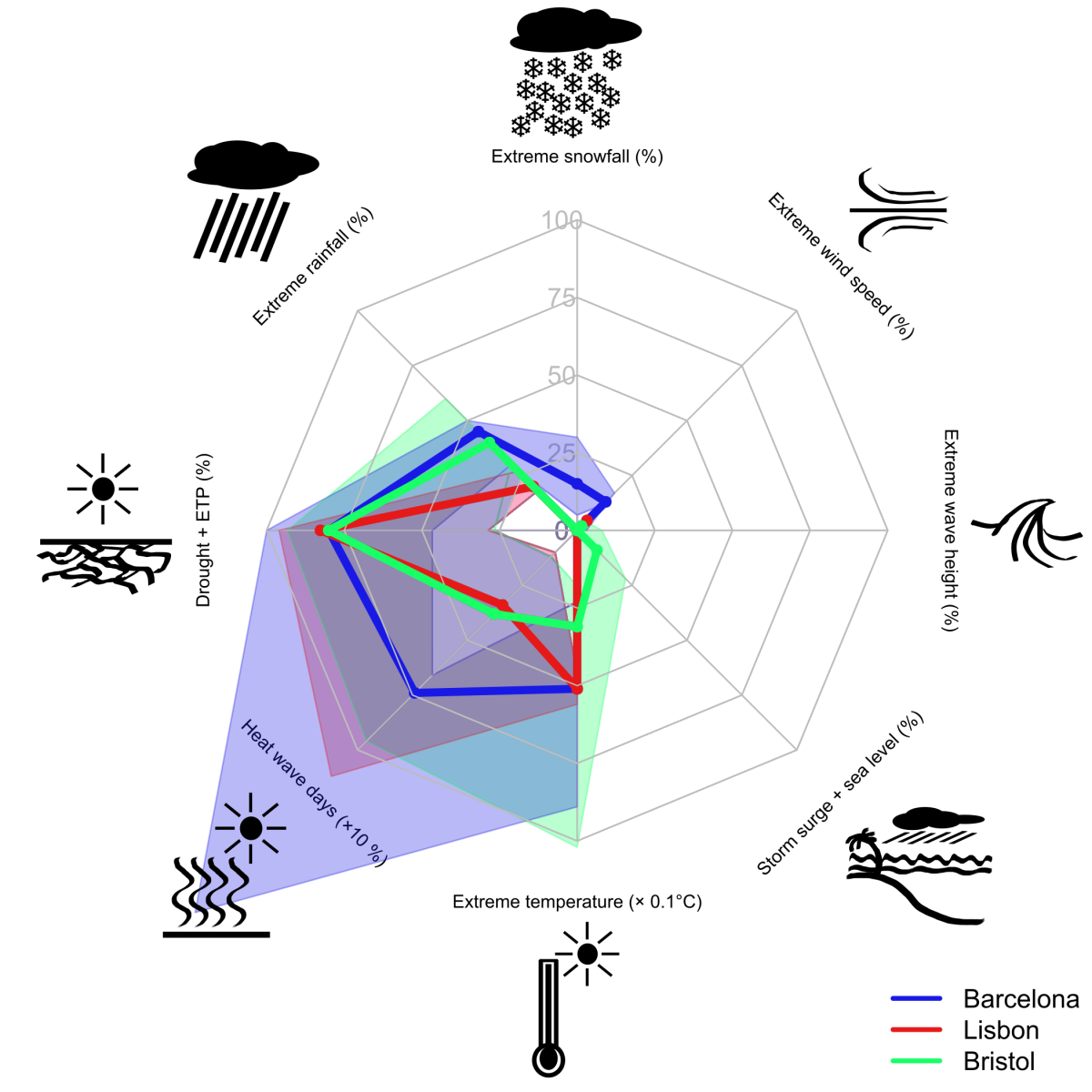 EXTREME WEATHER CONDITIONS IN LISBON CITY: HOW TO PREVENT AND PREPARE