The city of Barcelona is one of the three case studies of the RESCCUE project. The impacts of nature-based adaptation measures on both urban flooding and CSOs in Barcelona were simulated considering also future rainfall conditions. State of the art modelling tools and methodologies were applied to analyze nature-based adaptation measures selected together with the project stakeholders. Future rainfalls for the adaptation scenario were derived by FIC from statistical downscaling of ten different climate models (CMIP5) and considering two Representative Concentration Pathways (RCP4.5 and RCP8.5) from the last IPCC report (IPCC AR5). All the models were calibrated and validated also with new data collected during the project.

The proposed nature-based adaptation measures consist of the implementation of green roofs and rain gardens. Green roofs were assumed to be implemented on 143 hectares (approximately 5.5% of the building covers in Barcelona) and rain gardens on the great majority of the streets of Barcelona (see Figure 1). Rain gardens should take the runoff from streets and sidewalks. Data collected from studies of the Municipality of Barcelona (PLARHAB and a study from the Department of Urban Ecology) were used to evaluate realistic Sustainable Urban Drainage Systems (SUDS) scenarios. The Municipality of Barcelona is strongly promoting the implementation of SUDS, green corridors and new green areas. 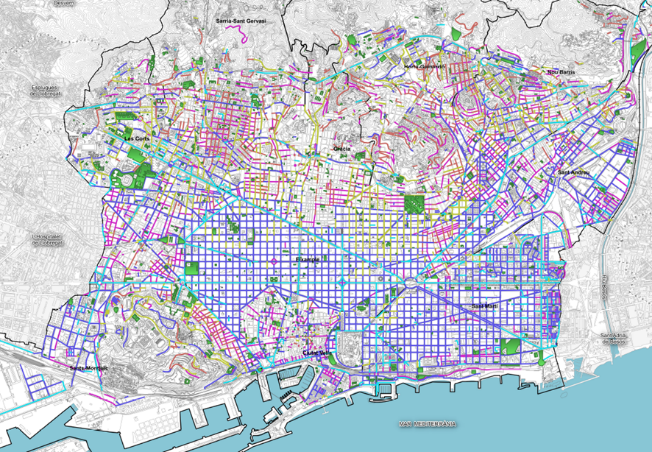 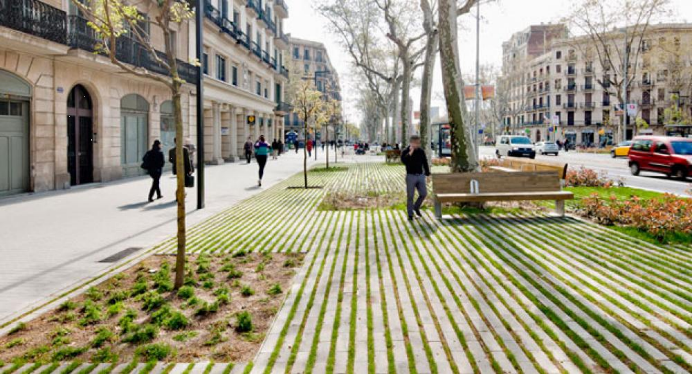 Figure 1. (Above) SUDS implementation proposed in the great majority of the streets of Barcelona (blue and purple lines). (Below) Example of SUDS in Barcelona.

The impact of nature-based adaptation measures on flooding was quantified in terms of intangible flood risks (for both pedestrians and vehicles) and also in terms of tangible Expected Annual Damage (EAD) that monetized damage to buildings, vehicles and indirect damages (like cascade effects on economic activities). Flood risks were derived from hazard and vulnerability for different return periods of design storms (T=1, 10, 50, 100 and 500 years). The intangible hazard for pedestrians and vehicles was obtained from a simulation of surface water velocities and depths using a coupled 1D-2D (drainage network – surface water flow) model together with pedestrian and vehicle hazard criteria obtained from laboratory tests conducted at the Polytechnic University of Catalonia. The Expected Annual Damage (EAD) was computed including damages to buildings, vehicles and a novel approach to quantify indirect tangible damages (e.g. the cascade effect on business and other activities interruption) and also based on novel flood-damage curves for buildings and vehicles estimated together with insurance company experts.

The impact of nature-based adaptation measures on CSOs was quantified in terms of selected performance indicators: annual CSO volume, volume to the Waste Water Treatment Plant and duration of E. Coli bacteria contamination (insufficient bathing water quality) in the receiving waters. Continuous simulations of a coupled urban drainage model and a seawater quality model were used to estimate these indicators.

The results show that the proposed nature-based adaptation measures can reduce vehicle high-risk flood areas by 14-45% (higher reductions are associated with lower return periods) and EAD by 46% (from 63M€/y to 34M€/y). Also, these measures can reduce annual CSO volume by 28 %, annual volume to the two WWTPs of Barcelona by 2 300 000 m3 and the time of insufficient bathing water quality in the seawater of Barcelona by 16%.